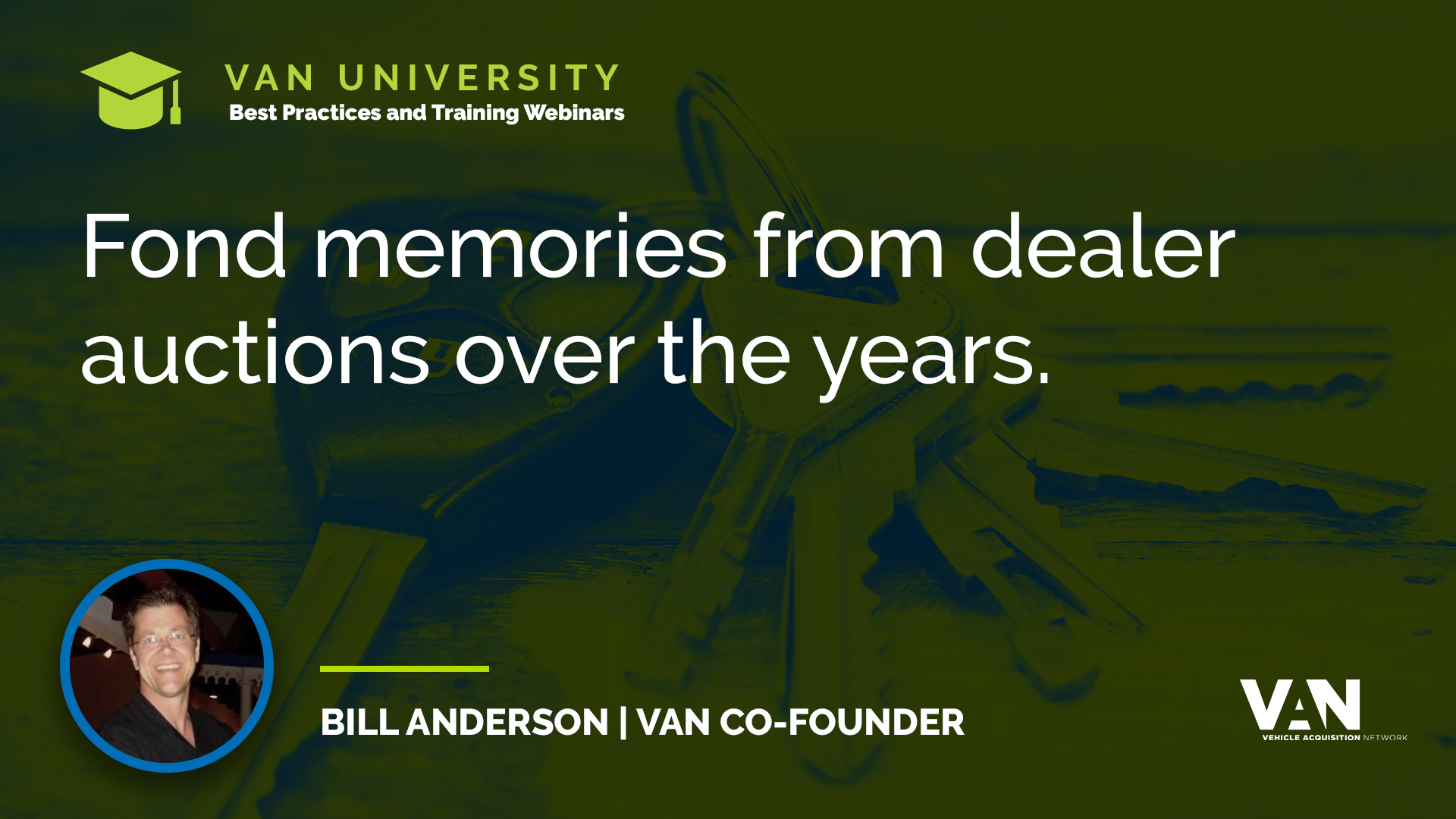 Fond Memories Over the Years from Attending Dealer Auctions

The new video series, 'The Auction' which sheds a humorous light on dealers at the auto auction is basically the brainchild of VAN Co-Founder Bill Anderson, who also plays ‘Frank’ in the series.

The backstory on developing these 12 tongue-in-cheek mini-stories about this time-honored tradition includes “what might come through if you could actually understand every word an auctioneer was saying and how everything is done,” explains Anderson in the video below from a recent VAN University webinar. “The purpose of these videos is to look at our past and hopefully give us a little insight into our future,” noted Bill.

The thought process, he explained, was to “make light of the fees that come with the auction--the after-cost, Dealer Shield, ...condition reports and how all that is determined. Who’s monetizing and who’s not? How is that really benefiting our clients and consumers in the end?

"We were just poking fun at the industry; we’re having fun at the auction’s expense,” Bill told us. "I know consumers like to poke fun of our dealer brethren all the time., as well,” he said.

Alternatives to the Dealer Auction

The introductory video that cautions not to get caught in its namesake: “Bidding Wars with Dinosaurs,” introduces the character ‘Stephanie,’ who uses an unheard-of system--‘math’--to determine which cars to buy. ‘Frank’ actually scoffs at the term in that webisode.

What does it all mean? VAN Co-Founder Tom Gregg explained, “ We know there are alternatives to buying cars. So, you need to “be strategic about the offer you’re making.

“Of course, we’re a bit partial to alternative options--buying cars direct from consumers,” Gregg said, As a “numbers game, if you put more numbers out there, you buy more cars.” How the Auction Has Changed

Anderson's character in the series, Frank, readily admits his favorite part of the auction is leaving, as every bidder now does, as, well, he said.

The auction used to be a “mecca” of franchise and independent, large and small dealer groups and non-dealer groups, he said. Very few dealers attend in-person anymore. Most attendees are reps--not from the dealerships--but assigned to rep cars throughout the auction.

Most dealers, he claimed, are “clicking a mouse” as they bid on and buy cars “they haven’t even seen or touched.” Anderson said, auctions for every commodity will always remain viable, however big the digital footprint manifests itself. There are now multiple sources for buying online.

“It’s changing, though,” Anderson admitted. "But Tom and I are here to help our dealers source cars from alternative channels.” The videos in this post are excerpts from one of ourVAN University webinars, which are conducted each month in the Learning Center, a no-cost no-obligation learning program for dealers and dealership personnel seeking excellence in being more profitable with their Buy Centers and used car businesses.

> Sign up today in the VAN Learning Center for more great information about sourcing vehicles from individuals and to be included in future webinars.